By Jim Lynch, The Detroit News

A trail cam picture snapped in late May appears to show a cougar on the move in Menominee County -- the latest to be discovered in the Upper Peninsula.

The latest appearance was in an area near Wallace near the Wisconsin border. A trail cam picture taken May 26 shows the body of a cougar moving out of view to the left. The animal's head cannot be seen.

Michigan's Department of Natural Resources and Environment received word of the photo on June 11 and dispatched a field investigator to the area. "The information... collected was shared with the DNRE's trained cougar team," reads a department press release, "and the consensus was reached that the photo and supporting documentation indicated the animal was a cougar."

"This is the first confirmed cougar picture in Menominee County. We appreciate the cooperation of the caller who shared the photograph and contacted the DNRE," said DNRE wildlife biologist Kristie Sitar in the release.

The animals are considered an endangered species in the state. 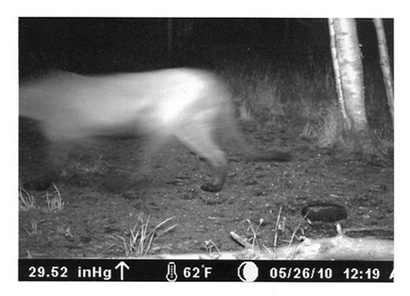