Been a very interesting, some would say frustrating, hunting season.  I would have agreed when I was a young, more impatient man.  Who measurements were based on ROI and results.  So.....  I had my target buck on the Mayodan, NC property come in sometime in October, at 30 yards. Using my crossbow, he mule kicked, and it felt like a good shot.  No blood and no bolt.  For those of you that have not shot a crossbow yet or are getting to the point that you can't pull back a compound bow, or in my case, can't see anything through the peepsight with 15 minutes of shooting light.  In most cases, you will not find your bolt, at the speed it is traveling, unless you hit bone (do yourself a favor and aim for the front or back shoulder when you shot.  In any case, no blood, no bolt.  Will be borrowing the neignbors metal detector as I have 3 bolts buried over the last 2 years that I would like to recover. :)  So no recovery of a deer.  Fast forward to archery black bear season in Virginia, had my target bruin walking in at 50 yards.  Coming in on the same trail that I walked in.  I was not wearing my Muck boots as it was 60 some degrees outside.  Wind was perfect.  He put his nose down to smell, stood on his hind legs, for what seemed like 5 minutes.  Nose in the area, then he hit the ground and exit stage left.  Have not seen him since then.

Had one of my target buck (a crazy 6 pointer with 4 points on one side and 2 huge spikes on the other).  It was gun season, dropped him at 30 yards.  I knew it was a bit high but wanted to see what he was going to do.  He struggled, got up ran 5 yards and fell, struggled, got up ran another 5 yards.  It was about this time that I thought I need to put another shot into him, but all that was showing was his head and neck, and he was moving about.  Well I missed twice,  I searched in my backpack for more slugs as my next 2 shots where 00 buck.  Long story made longer, I lost track of him and thought I should get down and finish him.  Once I started walking to where I thought he was, he had already moved, about 10 yards to my left.  He got up and ran off.  I went to the spot where I original shot him, lots of blood, next spot where he fell, lots of blood, next spot lots of blood.  For sure he ran off 50 yards and expired.  I followed the blood trail for 50 yards and decided to back out and come back in the moring, pick up the trail after my morning hunt.  It was a cold night, so should be a good plan.  Well, lots of blood, saw where he bedded down but I must of kicked him up the night before.  I did say I was going to make this story short, right?  Followed blood for 300 yards, and then none.  Did circles, found some blood, then lost it again.  Rinse and repeat.  Never did find him.  Lesson:  Do not push a deer, give him time to settle down.

Now for the most interesting mistake I have made so far for this deer seaon.  By the way, the season is not over yet in NC or Virginia.  Goes to January 1st.  However, with my oldest brother in intensive care due to COVID and word today that my girlfriend's dad has a brain tumor, they believe, and is being transferred to a VA hospital in Lynchberg, VA tonight.  Today, might well be my last day of hunting this year.  So to biggest mistake.  I have another property in Summerfield, NC, which is in a subdivision.  I have harvested 2 nice 12 pointers there over the last 3 years.  However, early on, checking my trail camera, no signs of big bucks.  So, I frankly, did not pay much attention to that spot.  Until today, when I pulled the SIM card from the trail camera.  See picture below.  I hope he is still with us and I hope I get a chance to get back there to hunt in December.

Moral of my story.  Life is a daily lesson, take the time to learn it.  More importantly.  Take the time to take in God's wonder.  I saw bucks chasing does, a red fox and a grey fox, I killed a 6x6 elk in New Mexico.  My 4 children and current 4 grandkids are healthy.  I say currently, as my daughter is having identical, triplet girls in May.  Not planned except that it is God's plan.

Merry Christmas and God Bless my hunting family for tomorrow is another day where your plans get replaced by God's plans. 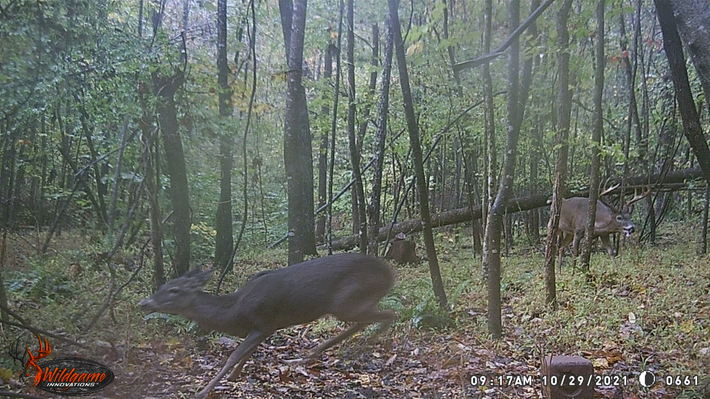